skip to main | skip to sidebar

Posted by simplyjessi at 4:53 AM 2 comments:

HOW TO HELP BURMA?

If everybody we know emails a request (not for tickets, but for
's action for ) to ticketsupport@ beijing2008. cn, it will
significantly slow down Olympics ticket sales and call 's
attention to the matter. may ignore protests, hunger strikes,
petitions, wearing-red shirts, etc. But cannot ignore these
emails, which get in the way of processing Olympics ticket requests.

Please see the template at the bottom. Please also pledge to send the
same email every 6 hours, or every time you check your email. If they
get tens of thousands of email a day, they will have to do something
about it.

should use its leverage to bring reconciliation and peace in
. However, it recently vetoed a Security Council resolution on
. Yet with the threat of Olympics boycott, has yielded
significantly to condemn 's genocidal regime.

Please note that this action is NOT a call to boycott the Olympics.

I am very interested in purchasing tickets to some of the events at
next year's Olympic games.

However I cannot, in good conscience, attend the Beijing Olympics
unless your government uses its influence to improve the political
situation in . has substantial economic interests in the
country, provides large amounts of economic aid, and invests heavily
in infrastructure projects there. Additionally, your government
provides extensive logistical support to 's military government.
All this make uniquely placed to influence it.

The people of have, in a very peaceful manner, insisted that
their rights be respected. I ask no more of your government than that
it cease its support for the current regime, and encourage dialog with
the democratically elected representatives of the Burmese nation.

I, the Burmese people, and the world would be grateful for your
assistance in this matter. Your courage will go a long way towards
making the 2008 Olympics a success.

Posted by simplyjessi at 1:10 AM No comments:

Second Joint Statement of Asian Students of in

Support of Democracy in

The monks started a peaceful protest 12 days ago and the SPDC military junta have left at least on “official count” 13 dead including a Japanese journalist, Kenji A. But according to information from NLD headquarters 250 protestors were killed including hundreds arrested and detained. Hundreds more suffered injuries when the police launched a crackdown on the protesting monks and civilians including raids on monasteries.

The scenario was an infamous retrospective of the 1988 uprising in today in the sense that junta government went on a rampage of killing at least 3000 student demonstrators while the world was sleeping. But now the whole world is watching and doing something. Nineteen years after the uprising and almost forty five years under a military rule, the people in had enough of it! Their resilience to take the brunt against this regime has reached its limit and that same resilience will endure any sacrifices that the Burmese people and other ethnic nationals will inevitably suffer for genuine democracy.

The recent crackdown on protests in has provoked widespread condemnation from the Western democracies. While the call for sanctions by the and may have little impact on restraining the regime it can deliver impact if a more decisive action from the United Nations will be put forward. The visit of the UN special envoy Ibrahim Gambari so far is the only concrete action that we see from the United Nations. We hope to see more decisive actions from the international community amidst diplomatic channels.

The Association of Southeast Asian Nations (ASEAN) despite its non-interference policy, scorn the junta. Though one may view that the statements made by , , and were just diplomatic rhetoric and is not enough to stop the killings, it is still a welcome move coming from these countries that have extensive economic relation with the junta. We urge that they must consider that doing business at the expense of the people is not good business. Human rights protection and promotion is their business too and they must exert more effort in holding the SPDC accountable for its actions!

We would like to emphasize that international pressure from social movements and civil society around the world is a warning that it would not allow this barbaric regime to continue to rule. The international solidarity showed to the rest of the world that it supports the legitimate demands of the peoples of and their heroism.

While the SPDC has guns, the peoples of have their duly elected government in exile to move the country forward. While SPDC is struggling to hold on to their power, it will not be for long because the people have already spoken – they want freedom, they want democracy, human rights and justice. National reconciliation will remain a hollow demand if it will not coincide with the unconditional release all political prisoners, including NLD leader, Daw Aung San Suu Kyi.

We believed that the resistance has not been smothered. It is growing and fueling rage among the brutalized people and the monks. The only one way to go is for the junta government to be dismantled and let civilian authority rule and democracy reign.

(Signed by 12 students from 10 countries of Sungkonghoe Master of Arts in Inter Asia NGO Studies Program)
Posted by simplyjessi at 1:05 AM No comments: I am copying you in the news that i got from the AVAAZ team that is responsible for the global petition in support of the democracy struggle in Burma. Please read message below. For those who have signed up already, you might receive the same message and i want to thank you personally for your support. and by the way, you still have a chance to forward it to your friends. to gather more signatures.

Burma's generals have brought their brutal iron hand down on peaceful monks and protesters -- but in response, a massive global outcry is gathering pace. The roar of global public opinion is being heard in hundreds of protests outside Chinese and Burmese embassies, people round the world wearing the monks' color red, and on the internet-- where our petition has exploded to over 200,000 signers in just 72 hours.


People power can win this. Burma's powerful sponsor China can halt the crackdown, if it believes that its international reputation and the 2008 Olympics in Beijing depend on it. To convince the Chinese government and other key countries, Avaaz is launching a major global and Asian ad campaign on Wednesday, including full page ads in the Financial Times and other newspapers, that will deliver our message and the number of signers. We need 1 million voices to be the global roar that will get China's attention. If every one of us forwards this email to just 20 friends, we'll reach our target in the next 72 hours. Please sign the petition at the link below -if you haven't already- and forward this email to everyone you care about:


The pressure is working - already, there are signs of splits in the Burmese Army, as some soldiers refuse to attack their own people. The brutal top General, Than Shwe, has reportedly moved his family out of the country – he must fear his rule may crumble.


The Burmese people are showing incredible courage in the face of horror. We're broadcasting updates on our effort over the radio into Burma itself – telling the people that growing numbers of us stand with them. Let's do everything we can to help them – we have hours, not days, to do it. Please sign the petition and forward this email to at least 20 friends right now. Scroll down our petition page for details of times and events to join in the massive wave of demonstrations happening around the world at Burmese and Chinese embassies.


With hope and determination,


Ricken, Paul, Pascal, Graziela, Galit, Ben, Milena and the whole Avaaz Team
Posted by simplyjessi at 4:29 AM No comments:

The the situation in Burma is a world headline today and you must be getting all the news from various media organizations already. In that case, i am introducing a new section from this website, it will cover two themes; one is about governments position on Burma and the other one is a compilation of actions from the civil society and/or social movements around the world in support of the peoples of Burma. For now, I am calling it the Burma Bulletin.

has been concerned on the situation in not so much on the violence that the ruling junta is exerting on the protesters but more on their economic interests. It is a shame that the biggest democracy in Asia is reluctant to take a bolder move in favor of the suffering peoples of . In its statement issued to the media, External Affairs Ministry spokesperson Navtej Sarna said that “It is our hope that all sides will resolve their issues peacefully through dialogue. has always believed that ’s process of political reform and national reconciliation should be more inclusive and broad-based,”

The statement is nothing more than an insult to the injury of the monks and the Burmese peoples. From day one of the protests actions, the monks have been demanding for reconciliation and yet they were charged with tear gas and shot at with live rounds. The junta does not know the real meaning of peaceful dialogue and national reconciliation. For almost 20 years, we never saw an inclusive and broad-based approach from the junta to deliver peace and development in the country. Contrary to its name, the State for Peace and Development Council (SPDC) has been consistently exploiting and persecuting the peoples of .

Enough of rhetoric, must put its foot down

Posted by simplyjessi at 7:37 PM No comments: 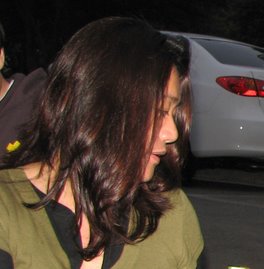